Living the Pantry Lifestyle - With just a little effort

This past week I've been thinking how a little effort can produce big results.  I was at one time a person who put things off if I could not become an expert.  I'm not saying perfectionist, I mean learning all I could and doing all I could about whatever subject I was interested in.

So when circumstances came together to make that difficult, if not impossible, I had to give my inner self a good talking to and let her know if anything was going to happen... it was a little at a time.  Like starting small with the garden and adding a little more the next year and hopefully a couple more raised beds soon.

And you know what?  A little has been a lot of fun and had great results.  While I continue to dream about a huge garden, having a cellar full of home canned veggies (which would be difficult as I do not have a cellar), raising chickens, etc... if I waited until that became possible... I would not have anything.

A great deal of the Pantry Lifestyle is accepting the limitations at the moment, whether there are limits on health or finances or time or space, etc... and going from there.  I'm finding I can do more than I thought originally within the boundaries of the limitations. 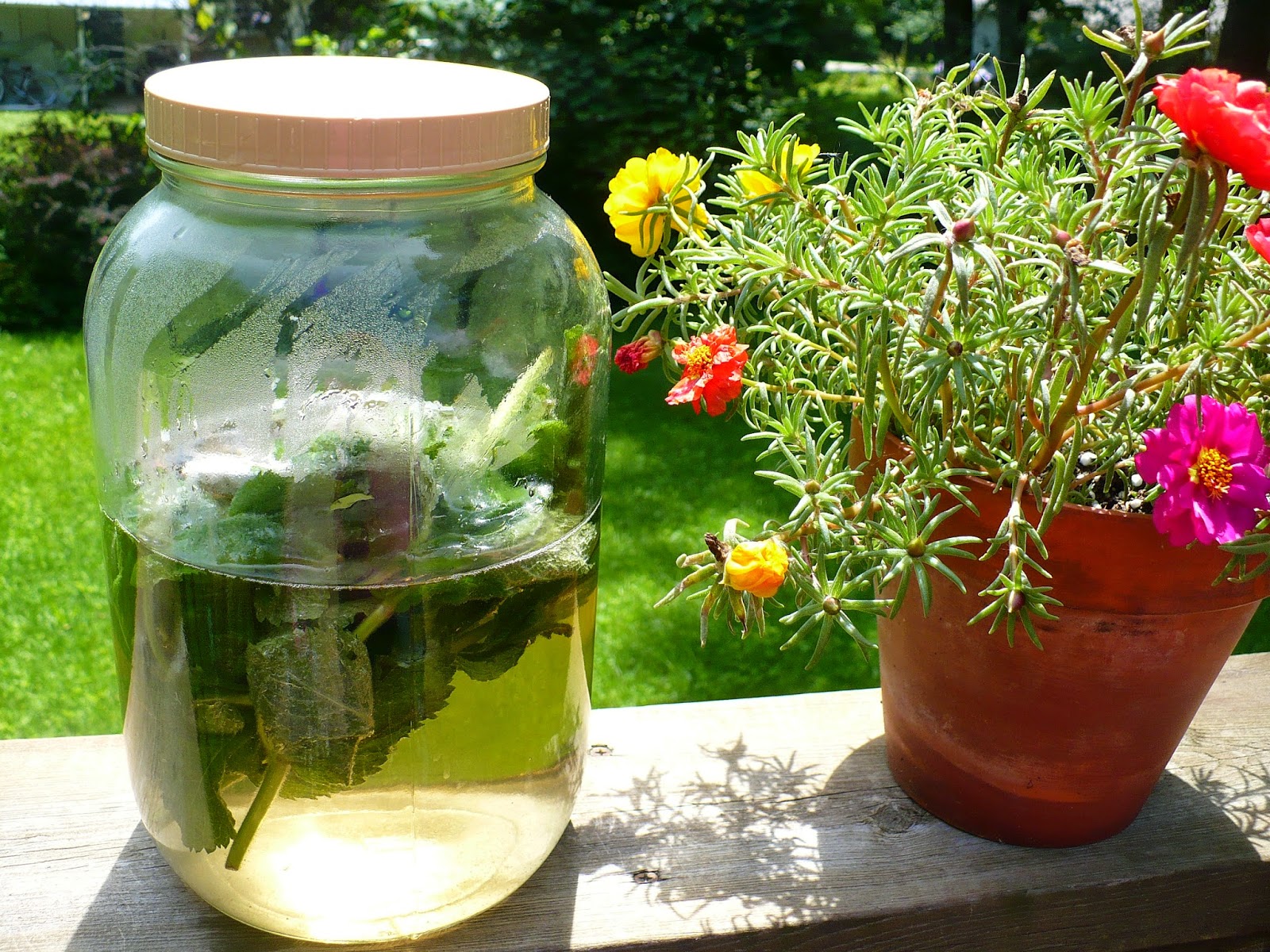 I was asked how I make my sun tea with the apple mint.  There are a few ways which always begins with cutting the apple mint, giving it a bath in the red dishpan, and a quick towel dry.

I find as long as I am using the mint, I don't have to add Splenda or sugar... which is a good thing.  I'm using Lipton Raspberry White Tea at the moment since I have lots of it.  Stephanie tells me the Tazo Passion tea makes a delicious iced tea.

1)  I fill the large glass jar with about two fists full of apple mint (stalks and all) and put it out on the deck for a few hours or until it is the strength I want.   Or...

2) I place four or five tea bags of the Raspberry White Tea into the water and then one or two fist fulls of the apple mint. The tea bags have had the paper tags taken off and the strings tied together to make it easier to take the tea bags out.

Of course, when I use a tea bag such as Celestial Seasoning that has no string, I just use a large slotted spoon to remove it.  The apple mint can be removed with clean hands.

This also gets brewed by the sun for a few hours... more on cloudy days.  Or...

3) This is the way I make it most often.  I cold brew the tea by filling the gallon jar about three fourths full (or a little less like shown here) and throwing in the tea bags.  That gets put in the refrigerator overnight.

The next morning, I take out the tea bags and add the mint, then put it out on the deck to let the sun brew it a few hours.  By making it this way, I have found the sun tea can develop that lovely apple mint flavor and the the tea bags do not become bitter (which they can if left in the sun too long).

The West Ladies have a different way of brewing the apple mint in this wonderful DVD (one of my favorites)... here. *  This is the DVD that got me started growing apple mint in the first place and it is full of wonderful ideas for growing and using herbs.  I'm a visual learner.  I like to be shown. 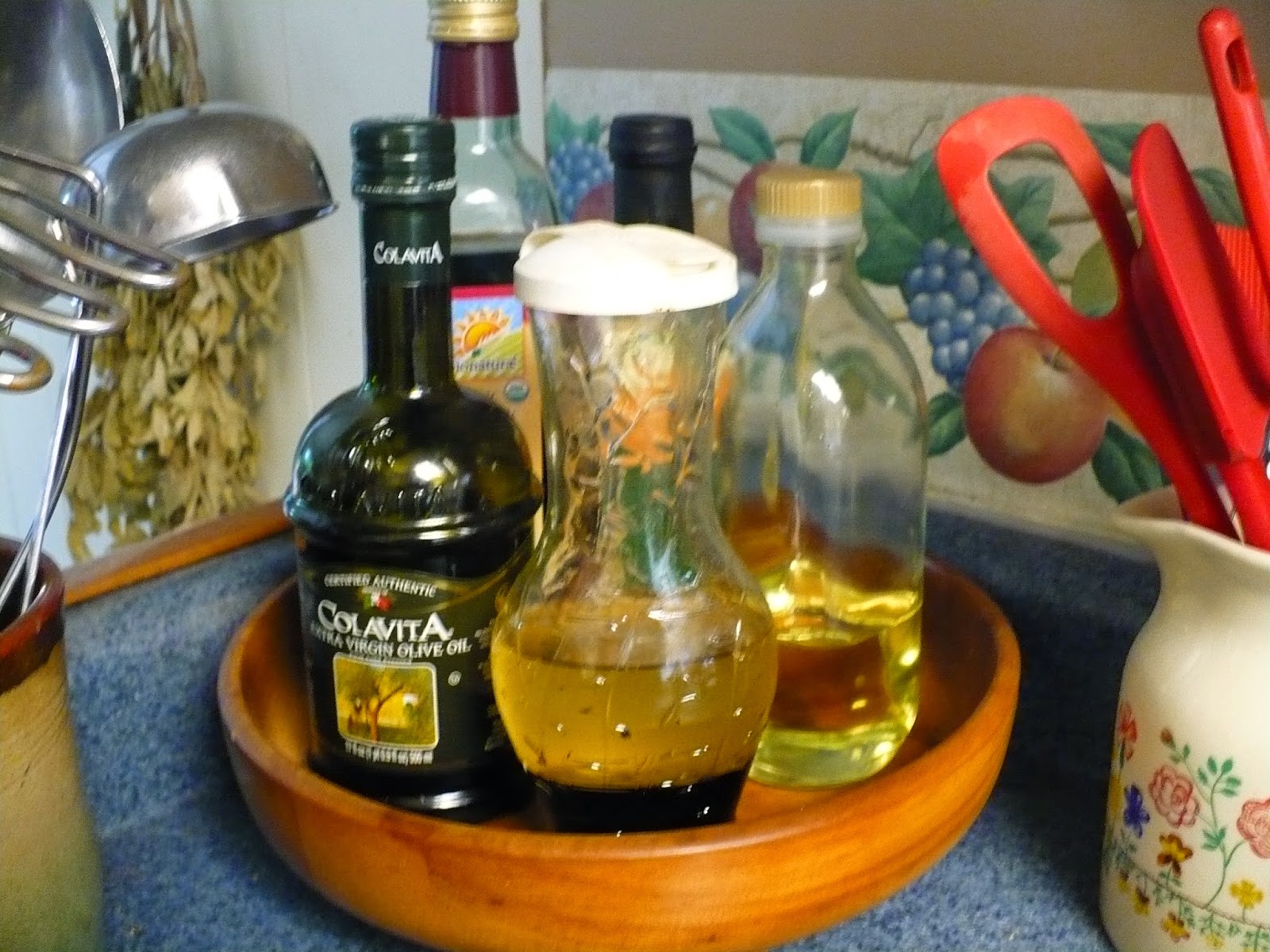 I've been making my own vinaigrette for a long time but I recently saw on a cooking show where they added about a teaspoon of dried Italian blend herbs.  So off to the health food store's bulk section for some organic Italian blend (very inexpensive there) and wallah... a delicious vinaigrette.

I also used a lovely balsamic vinegar that had been given to me months ago, why keep the good stuff for later?  I've also been making it in a canning jar but I remembered I had this cruet on a shelf in the garage and washed it out, it fits perfectly in that space.

See, everyone can do something.  Even if it is only making our own vinaigrette. 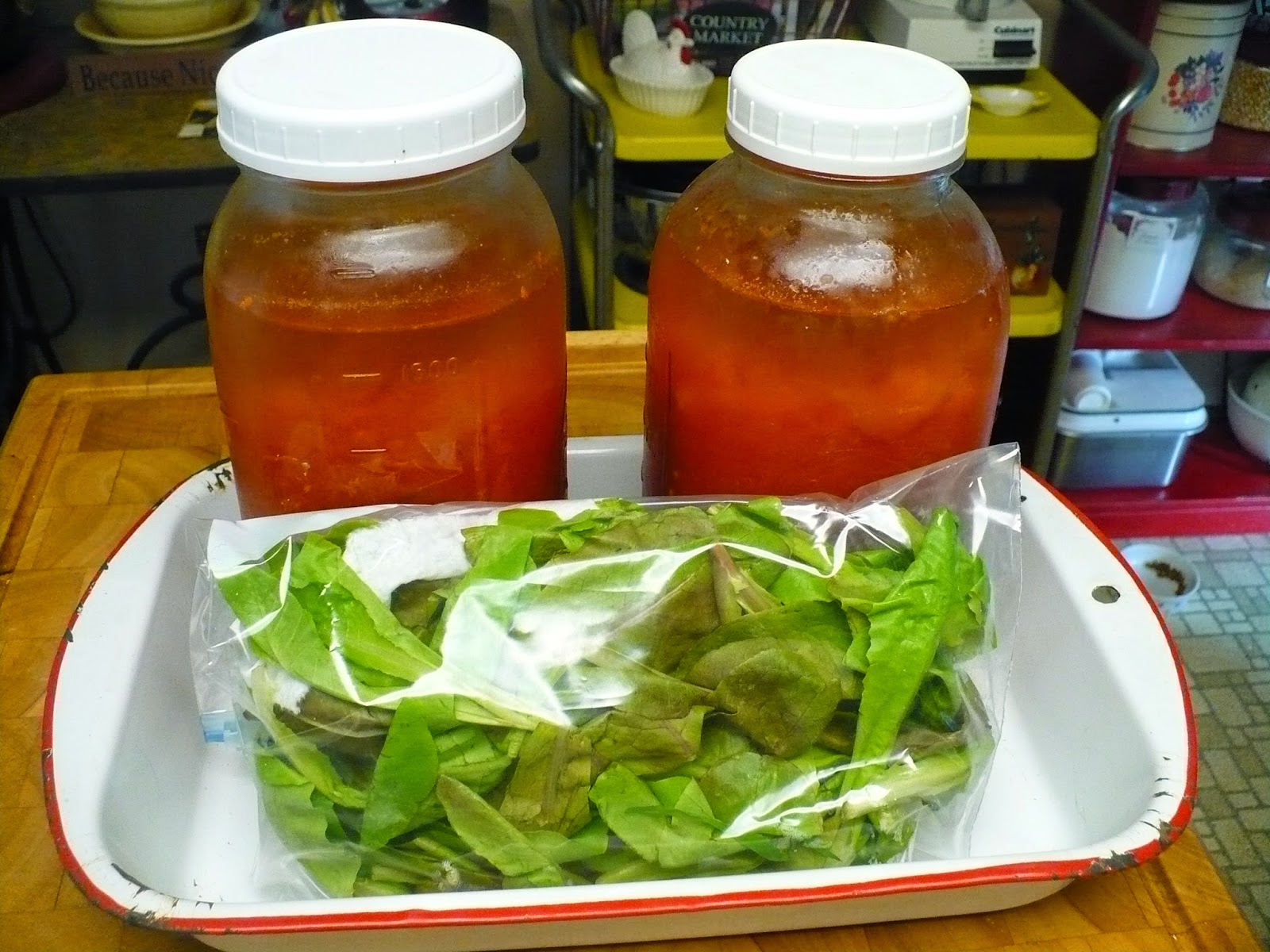 I had three large packages of frozen tomatoes remaining in the freezer.  One was left for another day but the two other packages were simply dropped (gently) into the stockpot about half full of water and simmered for awhile, taking out the peels with a slotted spoon.  One is going to become a veggie soup for tonight, the other will go "into something" later this week.

I'm harvesting all the lettuce since it is so hot.  It was cut back and given a bath, towel dried, then spin dried a little further, and placed in the Ziploc bag with a paper towel.  It will be used today or tomorrow.

There is more of it in the garden but it should be harvested within a few days and then I'm going to plant butternut squash in that space, we will see if it grows okay.  Seed packages are now half price at Menards so it is a very cheap experiment.

(I also bought a few packages of seeds half price to keep in the frig until next Spring, hopefully I can buy a few more while they are still available.) 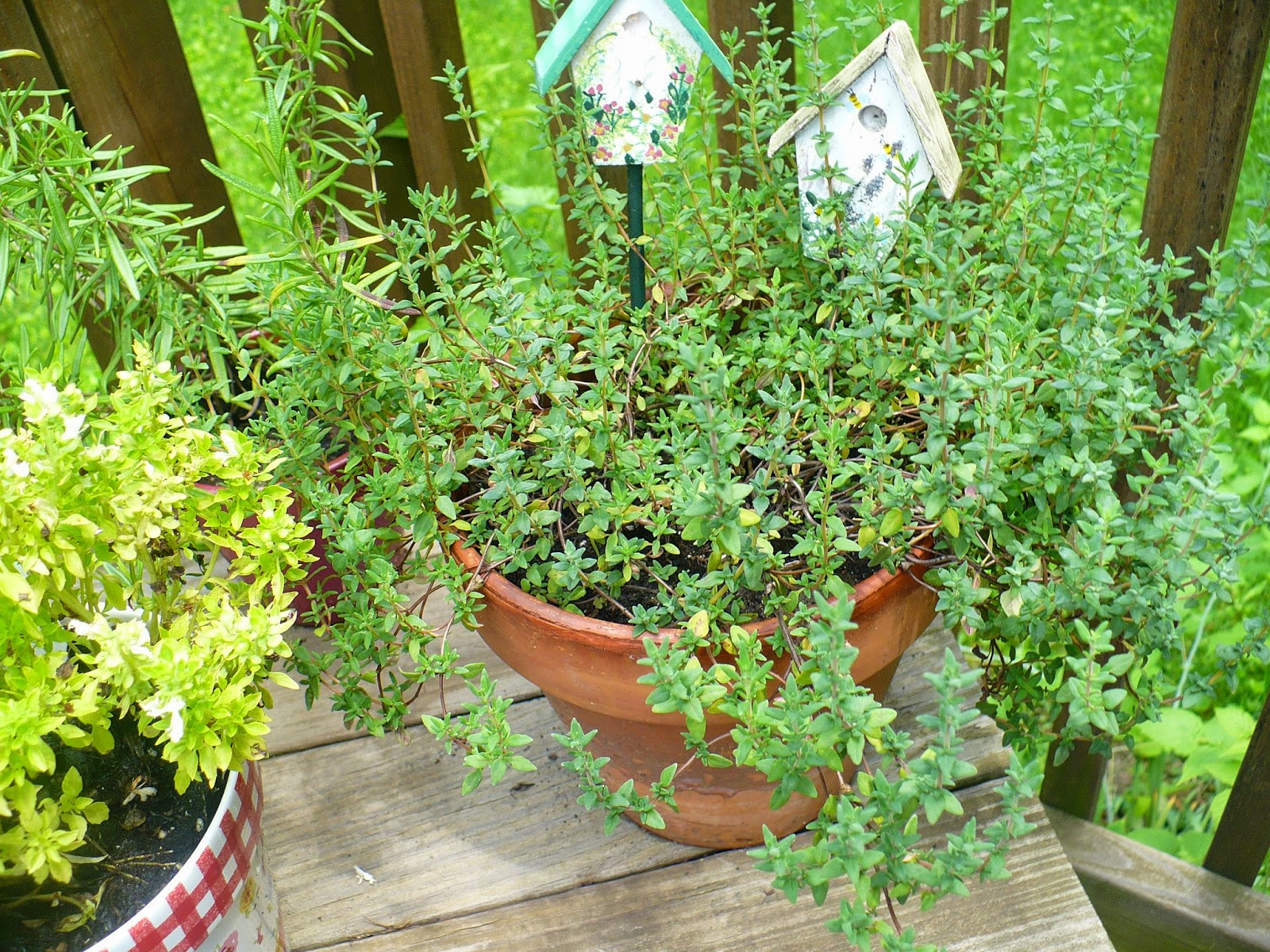 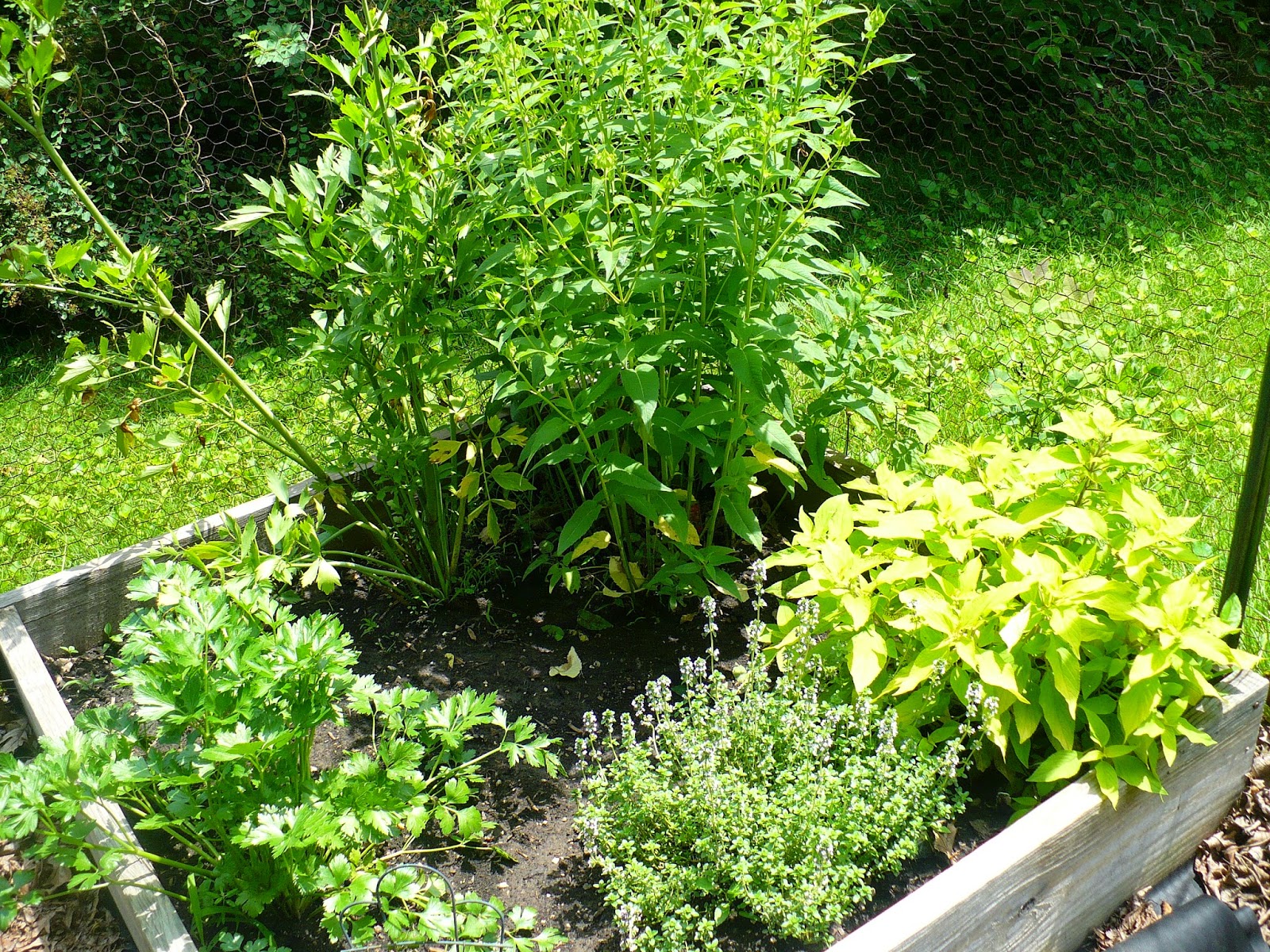 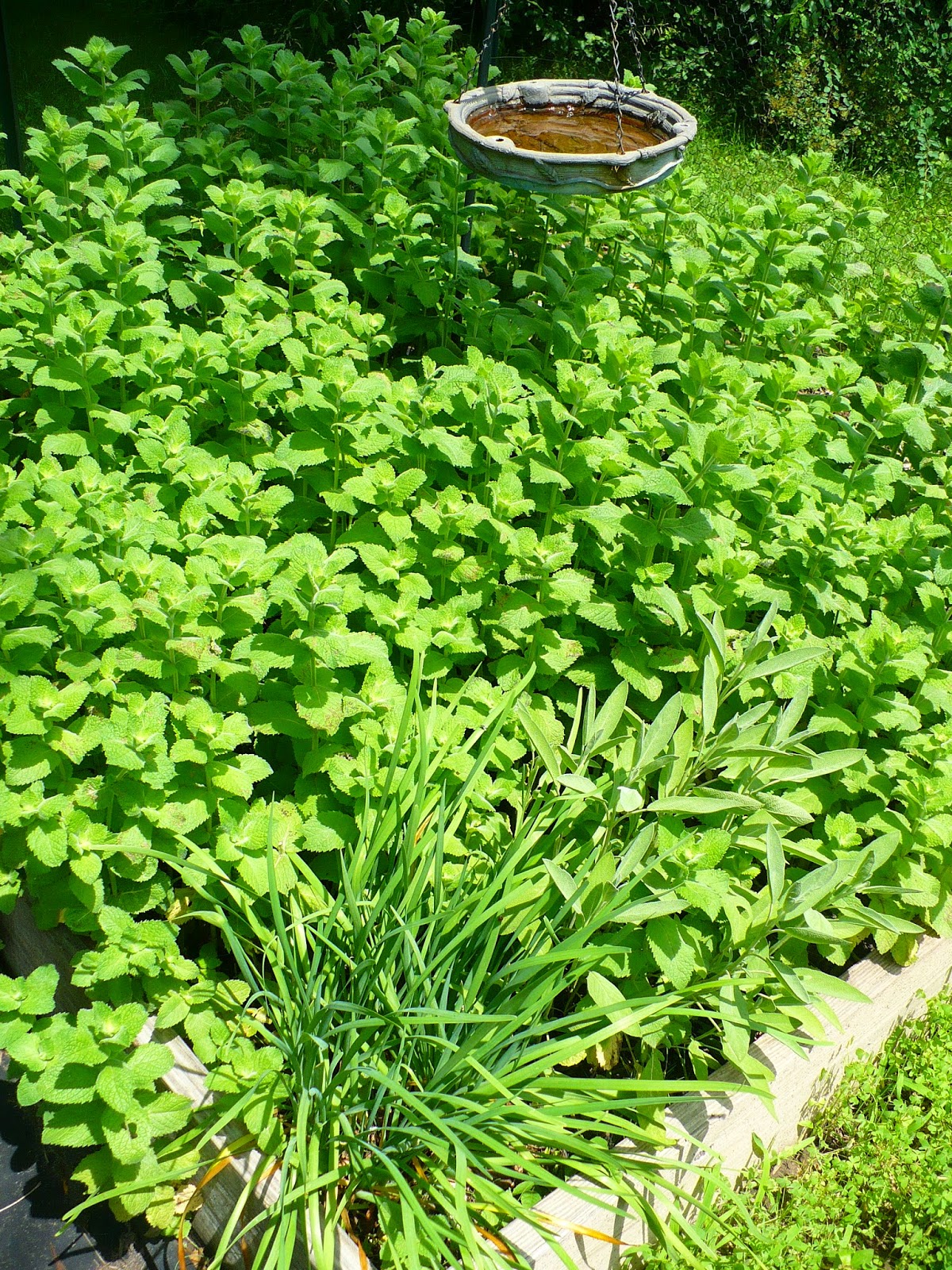 Almost anyone can grow an herb or two or three in a flower pot.  The top photo is of thyme, a tiny spicy basil plant, and the rosemary I transplanted from the garden.

I should say that when I planted it, the lovage and bee balm behind it were much smaller.  This year they decided to really take off!  That's one of the reasons I'd have an herb garden even if I didn't use them.  Lovely.

Then you come to the apple mint, the area around the garlic chives and sage is constantly being cleared of mint.  Even then they have pushy neighbors.  But I forgive the mint, it is indeed a thing of beauty... not to mention quite tasty.

*Amazon Associate's Link - I get a tiny percentage of the purchase, you pay no extra, and it all adds up!
Posted by Brenda@CoffeeTeaBooks at 9:25 AM

You make me want to make vinagrette and sun tea. Had to pin that so I wouldn't forget!

I, too, have had to get over the idea of doing things a certain way or not at all. I know you have read Edith Schaeffer -- she says if you want perfection or nothing you'll get nothing every time. That thought has helped me a lot over the years.

Love, Love, Love seeing your garden! It's really growing and flourishing! Mine is just beginning to grow! I didn't plant until the end of May. Thanks So much for sharing how you make your apple mint tea! Haven't seen any apple mint in the plant nurseries around here (PNW) but I do have Morrocan mint and orange mint. They make tastey suntea too! Thanks for sharing about doing a little at time as we can, too. I'm realizing the same thing as I get older.(Ahem!) Can hardly believe today is the first day of summer already! We're enjoying nice weather for June. The typical saying here in the Pacific Northwest, is that summer (weather) usually doesn't arrive until After the Fourth of July! That's why I don't plant my garden until mid or late May. It sprouts and then shivers through June, but doesn't really get going until warmer temps in July! Then we hope for a nice September!
Hugs and Blessings,
Laura C. from WA

Wow! Your garden looks awesome. Do you ever have problems with rabbits or deer?

Where does one find apple mint? I live on New England but haven't seen it. Any ideas?

I harvested a lot of lettuce yesterday, and today we had taco salad with our own lettuce! Love that!

I have a few tomatoes (green still) on one of our plants and hopefully we'll get more. My basil is not looking good, even though I planted it with the tomatoes, and my nasturtiums never came up. Bummer. It was pretty wet when we planted but it has dried out now and it should have been fine. I learn something about gardening every year!

And yes, just a little bit can make a huge difference. Those 6 small strawberry plants that were planted about 6 years ago, have grown and spread and this year we must have had nearly 12 quarts of strawberries! I couldn't believe it! We've never had such a great crop before!

I could go on and on but I won't. Enjoy the growing season!

I can't remember if I've already commented! But I wanted to say that I love the look of your garden in these photos......

Do you use your bee balm for anything edible? I have a large quantity in my garden. I just found out that it is native esp to my part of the US, which is central/western NY. One of it's names is "Oswego Tea." I live within 30 miles of Oswego. When I found out that it is a relative of mint and used in teas, I went out and took off a leaf and chewed it a little to see what it tasted like. It was a mild flavor, sort of minty. I probably would not make tea out of it-maybe? But if it IS edible (which I assume since I am still alive!) could the leaves be used in another way? It's a beautiful flower, but a pain only because it gets powdery mildew easily.