Here & There and This & That

I seem to be fighting the same cold which has kept Hubby miserable for a couple of weeks.  So far it is in the "is it going to settle or not?" stage.   So I've been resting more than usual these past few days.

One day I fluffed my pillow and brought out the throw which sits on the magazine stand at the end of the living room sofa.  Thinking I'd read "a chapter or two" of The Shell Seekers, I started reading.  Except for a few small breaks, I kept reading until I finished the book in the early evening.

You know... one of those times when you get so lost in a book it feels like you are visiting your own home and the pages of the book are real life?

I did thoroughly enjoy the book (obviously) but I liked Winter Solstice better for a variety of reasons and I can see why some have The Shell Seekers as a favorite.  One thing I have noticed in a lot of British novels (those not Goudge, Stevenson, or Miss Read) is how open their society was to people just living together and "sleeping around".

I shouldn't be surprised (and there is nothing at all graphic in the books) as British comedies even in the early 70s showed a difference in what shocked the Brits and what shocked Americans at the time.  Of course, now... it is not at all unusual for Americans to live together before marriage.

Anyway, I did enjoy the books very much. 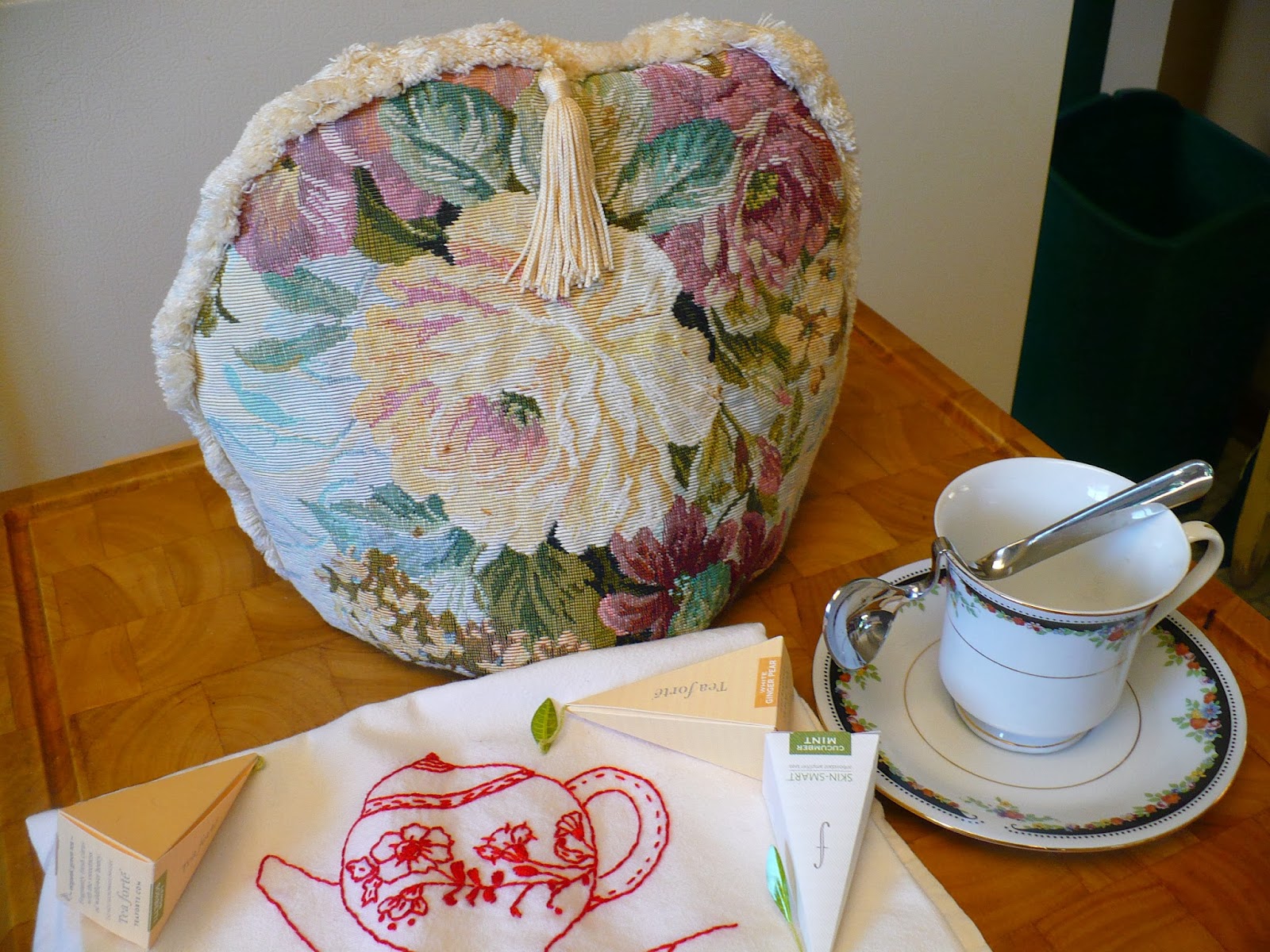 I did get some organizing done early in the week, two drawers in the hutch were last minute projects.  Decided upon when there was no room to put the large tea cozy back.  After about forty-five minutes of tweaking and cleaning and deciding I did not need a few items... the tea cozy rested comfortably at the top of a variety of table linens so it is in easy reach when needed.

Yes, this particular tea cozy keeps the contents of the teapot hot a lot longer than if one does not use it.  Someday I'd love to have a cute knitted tea cozy.   The pretty tea towel was a gift (last year?) that I enjoy using. 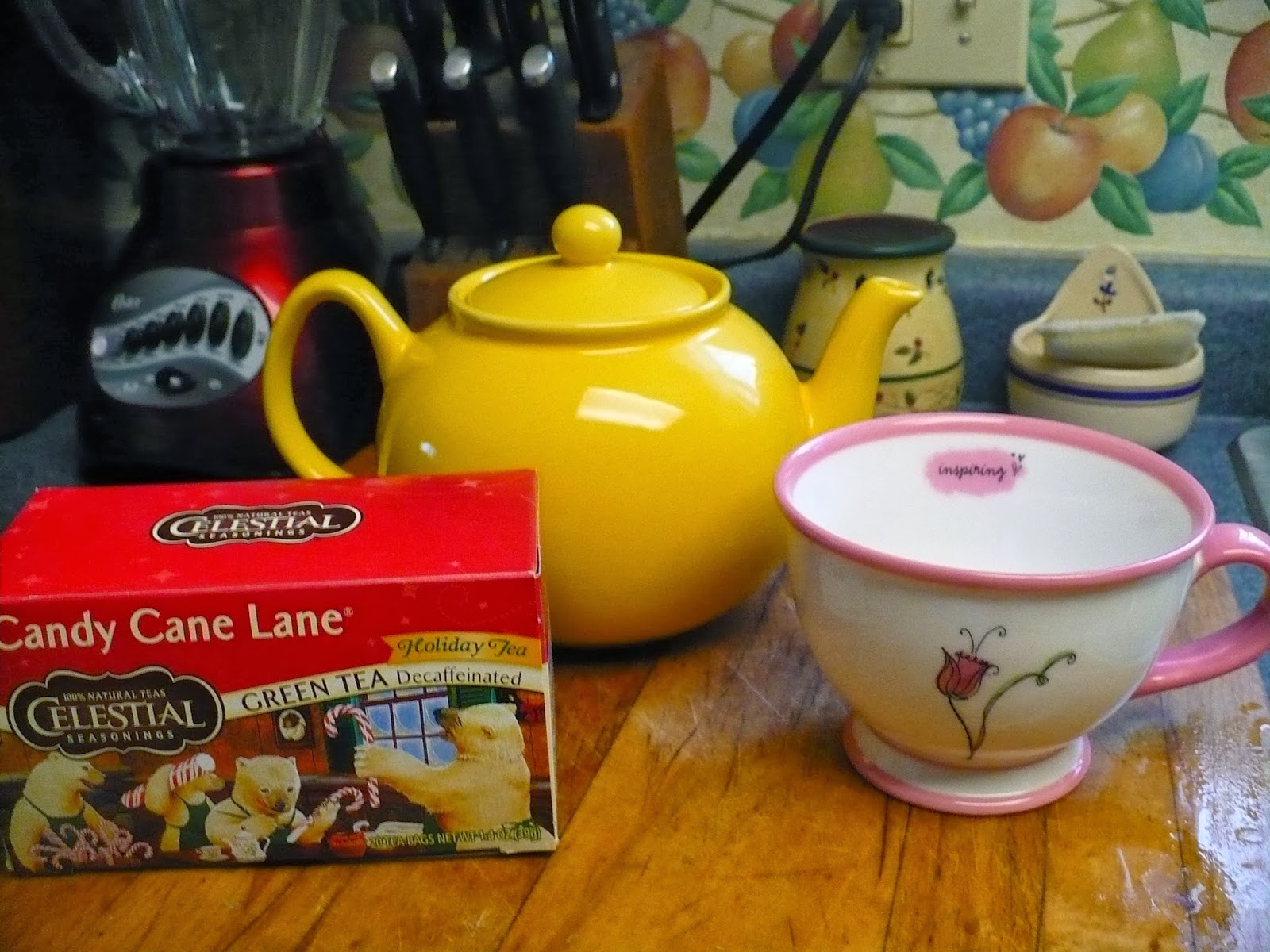 Although I have been enjoying a few other Holiday tea blends, I have been sipping lots of my favorite Candy Cane Lane tea since receiving some as a Christmas gift.  The large tea cup shown above is also one of the older Starbuck's cups. 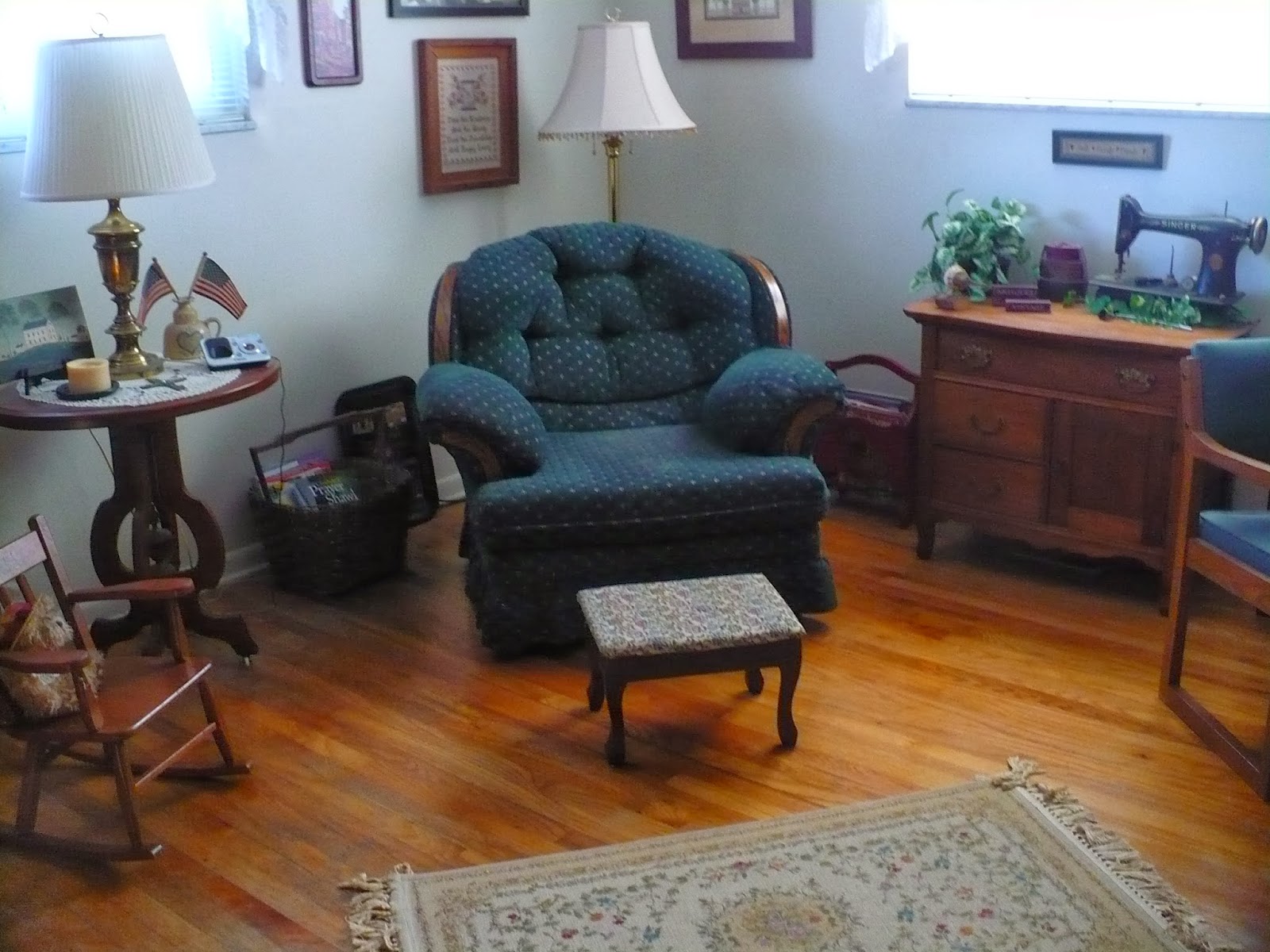 After reading the comments on the My World this Week post, I had to go back and look at the picture of my studio again.  It does look like the walls are blue!  Probably due to an optical illusion of filtered winter light coming in at such an angle as to create blue shadows on the wall.

It is actually a grey-ish white-ish very slightly green-ish shade.   Often when the sun is filtering light through the windows, it looks a little more green than it is.

The throw rug I showed in the same picture is now back to its' home between our bed and the closet.  I've decided the study calls out for a round rag rug... in shades of browns and creams perhaps?  I will continue looking for a small such rug at Goodwill off and on.

The chair is one of my all time favorite Goodwill finds.  It is so comfortable!

Now just one more tidbit of news.  I know some of you are also fans of Anne Ortlund's books.  Did you know she passed away a couple months ago?  I guess because she is not as well known as she once was (her son and daughter-in-law are well known now) that it was not publicized very much.

There is a touching tribute to her by her son... here.

The breakfast dishes have been soaking and they await my attention.  As does a load of laundry and a little decluttering here and there.  :)
Posted by Brenda@CoffeeTeaBooks at 10:27 AM

I really do like the Celestial Tea "Lemon Zinger". Add a little sugar and it's just like drinking hot lemonade. Delicious! Hope you get to feeling better soon.

What a lovely thing to just get comfy, bundle up, and get lost in a book for an afternoon, especially if you're fighting off a cold. It's been a long time since I've done that, but it's such a pleasant treat when it does happen. Making my way, slowly, through The Shell Seekers, but enjoying it.

I am enjoying your blog!

Thank you for the book recommendations.

I have never read The Shell Seekers, but just finished September, by Rosamund Pilcher. I really enjoyed it.

What a wonderful way to spend the day.

Thanks for giving us more peeks into your lovely home.

That was a beautiful tribute and exactly how I got sidetracked without leaving a message. I wish that I could sit long enough to read a book in one sitting anymore. There hasn't been a book grab me that way in forever.

Hi Brenda;
I have never had the pleasure of reading any of Anne Ortlund's books, but will look for them at the library. How wonderful to spend an afternoon lost in a book, especially with Rosemund Pilcher! It was so good for you, and your organizational feats accomplished much. One question tho, you didn't put the tea cozy away for good, did you? Looking forward to your next post! Its like a visit with a good friend. Love and Hugs, Nana

Was this the first time you read Shell Seekers? Part of the reason I like it so much, is because they made a movie of it with Angela Lansbury back in the 90's, I think. They did a good job, except they tweaked the ending a tad bit. Have you seen it? I don't know if it's still available. Anyway, how nice to sit and read all afternoon! I did that with Winter Solstice on a very quiet New Year's Day, as I wanted to finish it before the Holidays were over! I like your tea cozy. Makes for a dreamy afternoon: a pot of tea and a good book! Hope you get to feeling better soon!
Hugs,
Laura C. from WA state

I love the Shell Seekers, it's one of my very favorite books. She also wrote Coming Home which is just as good-great book about an aristocratic family in WW 2 Cornwall. Pilcher is a wonderful writer and you really feel like you are right there in the story. I like that her characters are not fully good nor fully bad, just like all of us in real life.

I read a lovely tribute by Anne Ortlund by her daughter in law.

I've not read Rosamund Pilcher at all but maybe have to check a book of hers out at the library when I am done with my stack of Grace Livingston Hill. There is a Mennonite book store I go to that has lots of old, used books. I'll have to keep my eye out for more Goudge.

Have a lovely weekend!
Deanna

Thank you for sharing about Anne Ortlund. She was a huge part of my formative years as a young mother and wife! Now with kids grown and settling into an empty nest, I hadn't thought of her in some time but it is fun to read that she is enjoying her heavenly home.

I didn't know Anne O. pasted away- I have a couple of her books I really liked her.

Personally I am a bigger fan of The Shell Seekers, but I do love how you put it, so lost in the book that you felt you were visiting in your own home. I did that this past week with Island Magic by Elizabeth Goudge. My paper back copy fell apart in my hands as I read it...And it was a hard copy to find! I nearly panicked when I found myself reading page 156 and the next page was 174 but found the missing pages tucked into another portion of the book. My heart sank when I noticed the missing pages, but I would have gone on and read it anyway if they had been lost!