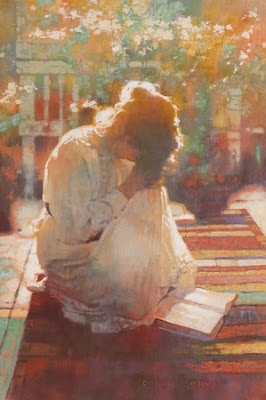 Today's Sunday post is once again written with pillows propped behind me.  I will write and run a spell check and leave the rest to the reader.  ;)

Quite often I don't know what I'm going to write about for Sunday until late in the week.  Today's ponderings have been fluttering around my brain all week.  I pray they land in an organized fashion that will communicate my heart's desire that we all learn to see God's work in our life.

I've written before about an excellent article I read a few years ago by an author who studied revivals in America.  Quite a bit of the article was basic history I was aware of already.  But then the author wrote a statement which floored me as he talked about "missing the revival".

He started talking about the Jesus Movement of the late 1960's through early 1970s.  I remember it well for it was during that revival that I came to the Lord... an amazing time as thousands were being drawn to Him throughout America.  What statement shocked me?

At the same time, and often overlapping among people, the Charismatic Movement was sweeping the nation.  The author wrote that old time Pentecostal churches had been praying for God's spirit to be poured out on America resulting in a renewed desire to serve him and the gifts of the Spirit manifested.

Their prayers were answered as a great outpouring of signs and miracles were manifested amongst Christians in America.  But the people praying for it missed it.  Why did both groups of Christians miss the answers to their prayers?

For you see, while the Jesus Movement revival did bring all ages of Americans to the Lord, it is best known for drawing the "unchurched" teens, twenty-somethings, and hippies to Him.  Even after salvation, they tended to still look "unchurched", too.

This group of converts changed the look of the Church, the sound of the Church (as it birthed Contemporary Christian music), and eventually the ministry of the American Church.   For prior to this revival, most people who were saved were assimilated into the Church in such a way that they all looked alike, talked alike, and acted alike.

While still holding firm to the Truth of the Bible as did previous generations (this was not the beginning of the postmodern churches)... they were less likely to retreat within four walls of a church for this was not the way they were raised.  Time does not permit going into detail but these converts, thousands upon thousands of new Christians, are now in their 50's, 60's, and older.

Their legacy is taking the Message to the people with their music, their writing, their desire to be Salt and Light in politics and the Market Place, opening Christian bookstores, starting Christian TV and radio stations, and while dressing modestly... they did not always look like those in previous generations of Christians.

As for the prayers of the Pentecostals???  Oh, my... they certainly didn't see this coming as God poured out His spirit in a Charismatic revival which started with the Catholics and spread to (shudder) Lutherans, Presbyterians, Episcopalians, and other mainline churches.

So... what does this walk down history lane have to do with us today?  This has been where my ponderings have taken me this week.

Do you miss God's answers to your prayers because they do not look like you expect?

I certainly have, it is actually a constant challenge.  I get frustrated with budget constraints and I don't see a miraculous provision.  I ask for healing and I don't see He gives me insulin and medicine.  I desire my family to all live near me and I don't see how my children are happily married, walking with the Lord, are a great blessing, and feed me once in awhile.

I ask for healing for my husband and I don't see how God provided Social Security Disability on the first application.  I prayed that we didn't have to sell our large house "in town" and I don't thank God for bringing us back home and making it possible to buy our "small-ish house at the corner of the forest".

I've learned to look for the God winks of my life, those times and places where the proverbial footprints in the sand can be seen.  I love to ask Him to show me His Signature in my days.  He loves to make Himself known.

For you see, when we ask Him conditionally then we... in our finite minds... risk not letting Him answer in a way that brings blessings to us and others.

Such as the Cross of Christ...

It was the religious leaders of the day 2,000 years ago who were praying for the Messiah.  But they were expecting a Warrior, one who would save them from the Romans and make for them Heaven on Earth.

His idea was so much better although very difficult for us who are finite to understand.  He came to suffer, to win back the Keys of the Kingdom for the Father, to fight the good fight of faith... to die before living again... to become the sacrificial Lamb.

We wanted Easter Sunday without Good Friday but we didn't understand one was impossible without the other.

As we are now entering Holy Week, I pray we all look for His answers and His footsteps in our lives.  Perhaps the greatest gift we can give Him this week is to replace our Why with Thank You.

Picture:  He Shall Hear My Voice (I have this artwork hanging in my dining area).
Posted by Brenda@CoffeeTeaBooks at 10:53 AM

Beautiful thought provoking post.I am 60 years old.My whole family is of the Pentecostal persuasion from many years back.I saw this Jesus movement Myself as a teenager but thought it was odd and not real because of My Pent.upbringing and with My whole families influence.I see now God's workings in it.It was the revival the old folks were praying for and they did miss it.What a wonderful post for this glorious week.Yes,I do want to keep My eyes open for the way He will answer My prayers.

Wonderful post, Brenda - especially the reminder that He loves to make himself known.

I grew up in Alaska and my father was Minister of a church that Jesus People flocked to in the early 70's. It was a big blessing and surely blew a fresh wind of the Spirit in our church. The Lord guided my dad with wisdom on how to shepherd these lambs and he was so grateful - because it turned into a beneficial experience for all. Thanks be to God!

There is so much great "meat" in this post; how we often miss God's answers to prayer because we aren't looking in that direction. Good point about how the religious leaders did not realize Jesus was the Messiah

Oh yes I remember those days. Brenda your words came together Perfectly. From the first thought to comparing how they thought Jesus would come and be you wrapped it up as a total beautiful study. My eyes are again open. What have I missed that was there right before my eyes? Plenty I am sure. When we look through the eyes of perfect love our Savior can really show us a new world can't He? Sarah

Oh, yes. Happens all the time. I'm asking for a boat and the canoe floats along or whatever the case may be. I am the same age as those who came into the Kingdom as the result of the Jesus Movement; although, I was already saved and a member of a church. I do remember there being some consternation among the deacons about the girls wearing proper garments and the guys wearing shoes. They walked around barefoot and thought nothing of coming to church that way. It is to their credit (the deacons) that they decided to keep mum about it. One of those barefooted boys is the head of a nationwide church today and has served in missions around the world. What an amazing influence those wonderful converts have been to the Body of Christ. Good reminders, Brenda. Very good. And aren't we glad that we were welcomed in as the result of the Jews not taking Jesus as their Savior? I'm convinced that, if they had, the Lord would have already returned to them two thousand years ago.

Brenda, Your post today brings tears to my eyes. I don't know a single thing about this period of history of which you write. I'm just old enough that it might have touched my life but was so sheltered in my 'religion' that I never knew it existed.

But I understand this post on a very personal level all the same. In the past twenty five years I was asked to leave that 'religion' and another church. Oh I was so hurt and so desperate for God in my life but I didn't 'get it' until I was out of church. I've been on a journey that is so different from anyone's experience that I know. I am sure there are others like myself, I just haven't had opportunity to meet them.

This past year, my husband and I chose to take a sabbatical and spend time in prayer and seeking for 70 days. We didn't consciously choose 70 days we just chose a start and end date. Right up until day 70 we didn't have an answer to our petitions, but we'd seen plenty of answered prayer for others.

We sought and we waited and we cried out and we pressed in harder. And ultimately, we were asked to leave the synagogue we'd attended for four years on day 70. We were astounded. Here we'd been pressing in and this was our 'answer'? You talk about an answer that doesn't look like what was expected!

This past year has been such a powerful year for us. We've had some personal spiritual moments that stunned us with their intimacy and grace. We've seen prayers answered that we'd been waiting to see answered for years. We have been moved beyond words by our personal relationship with God, a relationship that was hindered by our association with 'organized religion'.

We're looking for a church, but in the meantime we continue to spend more time with God than we ever had time to before. We have a more powerful prayer life. We have been blessed in ways that only God can bless. We come to a new year now, and we are looking forward to see where God takes us next. We're looking harder at some of the disappointments we experience to see where the answer is in it all and we're being trying to give thanks for every single one.

This is so good.

I was a kid during this period but growing up in Southern California I remember much of it.

Thank you for this perspective - that we don't see the Lord's answers because they don't look like what we're looking for......

Love this post Brenda - so much wisdom in these words! Thank you.