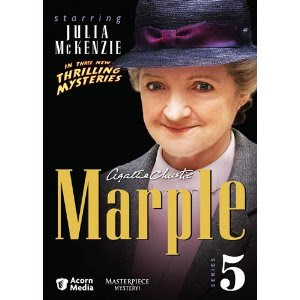 I didn't realize just how gloomy it has been here until I was walking in the sunshine today.  Only from the house to the car and the car to the store... but it was still nice to have the cloudy weather behind us for a day or so.

I enjoyed reading the comments from yesterday's post.  They reminded me of some other surprises I've had when watching BBC shows.

For instance, anyone who loves Judi Dench in As Time Goes By and then first saw her as the new M on the James Bond movie must have had the same reaction as I did.

Huh?  However, I found out her character was based on a real life head of MI5 who was a woman!  It was a stretch for those of us who knew her in comedy and Period pieces but she is a great actress.

One of the funniest instances of "only slightly" recognizing an actress happened when I was watching Miss Marple with the "new" actress in the title role (Julia McKenzie).

Well, I kept looking at her and thinking how she reminds me of someone else and then it was her voice that sent me to the Google box on my laptop.  That's who she is!  She is the same actress who stars on Fresh Fields but she's aged a lot since the 1980s (haven't we all?).  But her voice was the same!

Now, there were some of my favorite shows that I already knew where I first saw the actresses.   On Rosemary & Thyme, Felicity Kendal was on Good Neighbors and Pam Ferris had been the mom on The Darling Buds of May.  She also plays Sister Evangelina on Call the Midwife but I didn't recognize her at first.

Another famous actress who got her start on The Darling Buds of May?  That would be Catherine Zeta-Jones.

Anyway, it is true that one CAN make a game of "what else was that actor or actress on".

My husband still sees a commercial for Blue Bloods and says, "It's Magnum!".
Posted by Brenda@CoffeeTeaBooks at 5:01 PM

My husband is better at that game of recognizing where he has seen an actress or actor before. Mostly I just think they look familiar. One actress I like from Ab Fab has her own travelog show, in one of them she travels to the beginnings of the Nile River. Oh dear, what is her name? Joanna Lumley!

It is interesting to recognize actors in new roles. I will recognize someone and my hubby will assure me I am wrong, and then we look it up, and voila!
I really enjoyed your previous post too, Brenda.

Oh there's another new Miss Marple? I remember loving the theme song for that so well that I picked it out by ear and now it's in my repertoire. Ha! Another thing I love to do is Google the actors to see how they're doing now. Sadly, I find that many are gone.

Sometimes the fun for me is finding how an actor is connected to someone else I'm familiar with. Recent example the lead actress on the British show New Tricks used to be married to my all time favorite Brit actor, Robert Glenister.

Side note: my parents LOVE the New Tricks series after I stumbled across it accidentally. If you get the chance, check it out.

I was watching a bit of MI5 on netflix and the lead is Mr.Darcy! ha!

We love British shows but I try to be careful - they are freer with their language and other things than I like for us to see and hear!

That is what's great about watching netflix or dvds - we just skip those parts!