Chicken Little had it right! 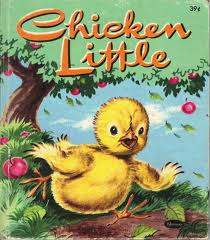 So... the alarm clock was set quite early today as Hubby wanted to be in line at a food pantry at 7:00.  Imagine my surprise as I turned on the local news and heard about a meteor the size of a school bus hitting Russia.

It's a good thing we are no longer in a cold war... even then there were reports that some Russians thought it was an American weapon.

Later on a national morning news show, a well known physicist said the best line I've heard, yet... "Mother Nature is showing Hollywood that they have nothing on her!".  All jokes aside, the injured now number over 1,000.

Hubby and I found it rather ironic that we'd been watching a show about meteors on TV yesterday (rather, listening to it from the kitchen).  There has been a plethora of shows about meteors and asteroids in the past couple of days as a "near miss" asteroid is passing earth today.

Such events make me glad I truly believe... without a shadow of a doubt... that God is in control.  ;)

A gentle snow has been falling throughout the day, which put me in the mood to bake something.   I didn't want anything complicated or a new recipe.  So... I went through the recipe card file which holds my "tried and true treasures" and came upon a favorite cinnamon quick bread recipe, one given to a teenage Stephanie from a friend in Iowa.

Hubby arrived home to the aroma of something baking and asked how soon it would be done.  After all these years, I still must explain the concept of letting baked goods "rest" for a short time before cutting into them.  Otherwise, he would have been in front of the oven as soon as the buzzer went off.

Patience may be a virtue but when the aroma of cinnamon bread is speaking to you... it is not easy.
Posted by Brenda@CoffeeTeaBooks at 12:16 PM

Isn't that rather sad that some in Russia thought it could be an American missile? John's response was to ask if it was a North Korean meteor. We have both said that God is still in control lest anyone should doubt it. It's probably more a wonder that these things don't happen with great regularity.

(John also says that there is no trouble to cut into hot bread...one simply needs a ver sharp knife and a suit of armor. What a nut!)

Yes,I too am thankful that God is in control of all things...so sad for the people in that area....I didn't hear of this until coming here....blessings

Sounds cozy at your house today!

Could we have the recipe for the cinnamon bread, please?