Friday Musings and a link (or two)... 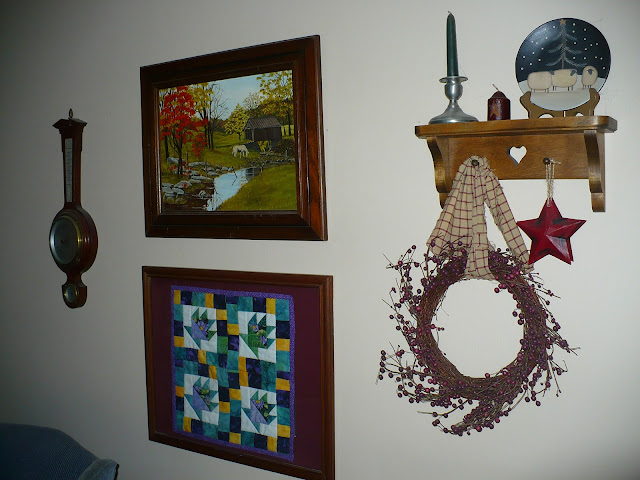 First, the link!  My daughter was also asked to write a guest post for I Take Joy.  Stephanie knows the Clarkson family but she's particularly good friends with Sarah.

Some of my blog friends also read Stephanie's blog (when she has time to write!) but few may remember she has a B.A. degree in Interior Design.

I was reading her post over at Sally's when I realized I knew the place she was writing about... our favorite coffee shop near campus!  It was not only her description of the coffee shop that gave it away but it was the way she talked about her favorite cake they serve, hehehe.   You can read Stephanie's post... here.

Just as I was getting over the flu last week, a season of busy-ness arrived that has kept me away from answering most of my e-mails and commenting at friend's blogs.  I have been forced to read most while scanning Google Reader.

Then Mr. & Mrs. Christopher's car broke down.  Our daughter-in-law called Hubby and he went to her rescue.  I've been acting as chauffeur, which has taken me away from home but also given me a chance to spend more time with Mrs. C.

After I picked her up from work yesterday, she asked if she could buy me a pumpkin spice latte at Starbucks.  Well, you know how that makes me happy!  We talked for nearly an hour, almost forgetting to pick up Christopher after his last class.  :)

Oh, regarding comments from yesterday...

1)  Yes, we do know we have to repair the wood on the front porch soon.  Fortunately I'm married to a guy who has an M.S. degree in Wood Science and carpentry experience.  He had such a huge Honey Do list this summer in the midst of needing surgery and the final preparations for his military reunion in Washington, D.C.

He had spent two or three years helping to put this reunion together and even though he had to travel with the stitches still in from his surgery, it was all he hoped and more.  The summer flew by, can you believe Thanksgiving is just two weeks away?

2)  Yes, Victoria really is this cute and sweet... most of the time.   She becomes all feline at times and stalks our feet.  One never knows when she has seen us coming and crouches behind a chair, only to pounce and give us heart failure (especially at night!).

3)  Hehehe, none of the dried herbs are catnip or you would have seen a picture of a Maine Coon rolling in the basket.  One of my bloggy friends sent Victoria catnip toys soon after we adopted her and you should have seen her that Christmas!

The basket is the same one that Carolee brought the fresh herbs in this summer, so where to put the dried herbs was easy.  Her herb farm website is... here.   You can sign up for her newsletter and read the archives at her website.

Garden lovers should brew a pot of tea and spend time reading her newsletter archives, which have pictures and prose of her trips to gardens around the country... although I don't allow myself any liquid refreshment close to the laptop, you may not be so clumsy.  ;)

4)  The Friendly Village platter is in a sturdy picture hanger and on a thick nail so it is fairly safe.  It isn't an antique but I look at all my china the same way... I love it and I want to hold on to it but I also want to USE it (in this case, hang it).  ;)

If something is broken... and things have been broken... at least they were enjoyed.  Neither of our mothers used their "good stuff" very often and both died with those things in boxes... and neither went to their Reward taking anything with them... lessons I learned from them!

Okay, there is more housework to do... a decluttering project... and a weekend blog post to write.  Not to mention my need of a second cup of morning coffee.

Miles to go before I sleep...
Posted by Brenda@CoffeeTeaBooks at 10:12 AM

No matter how far behind you may feel, I am convinced I'm more behind! I am so looking forward to Thanksgiving this year when my daughter and her family are coming from Maryland for 5 whole days and parts of two others......

I'm so delighted to hear of your husband's successful military reunion. Actually, it made me a little surprised to realize how happy it made me feel.

I like your daughter's post, too, and your mention of helping your son in ddl with their car problems reminded me of times my mil came to my rescue, long ago. At times I found her a bit intimidating, though I loved her and respected her greatly, but I always was touched and awed by the way she would drop anything and come to the rescue if I asked for help.(And not just me, any of her 10 children or spouses or grandchildren would get the same response.)

It sounds as though Mrs. C. (no longer Miss M) knows what you like at Starbucks!