Most of my summer reading was very light and on the Kindle.  I'll share about my favorites of those books next time.

However, I do still enjoy my "books I can hold in my hand" and here is listed the cream of the crop. 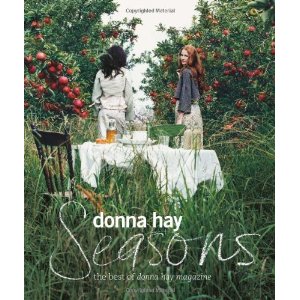 This is a seriously big, beautiful cookbook (imagine the magazine's size and over an inch in thickness)!

Donna Hay is an Australian magazine I peruse at Barnes & Noble from time to time although I've never purchased it (like the British magazines I love, this one is too pricey for my budget).

The photography in each magazine is fabulous and any foodie would enjoy the recipes.

So when I heard about Seasons, I knew I'd enjoy it.  The book is separated by seasons (thus, the title) and within each season it is divided into savory and sweet.

I read the version where the recipes have (for the most part) been given in non-metric measurements for Americans.  As one would imagine, there are some complicated recipes where a cook could lose herself in the kitchen all afternoon but I found most to be very simple and using fresh ingredients.

Highly recommended for anyone who loves to cook fresh fresh, seasonal ingredients. 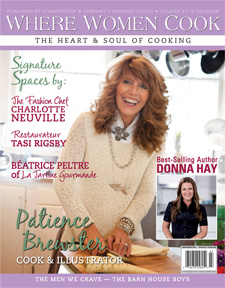 My favorite magazine is Where Women Cook.  I love this magazine and my copies are brought out and perused often.

Each issue is really a softbound cookbook filled with great stories about people who love to cook... some ordinary cooks like myself, some food bloggers, others restauranteurs, etc.

I use Christmas and Birthday money to purchase the quarterly magazine when possible.  Where I live, it is only available at Barnes & Noble and online.

The latest issue has an article about Donna Hay that is very interesting.

These magazine are pricey but SO worth it for people who enjoy cooking and reading about cooks... and they only come out once every three months.  One of the regular features is an article by the ladies from Gooseberry Patch and the recipes given by each cook range from the very simplest to gourmet so there is something for everyone.

Entertaining With Longaberger: Celebrating the Seasons 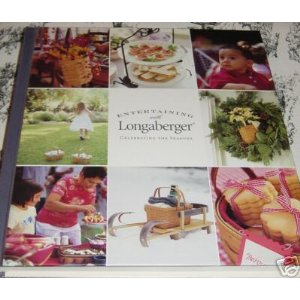 I had to pick up my prescription one afternoon and decided to stop by the Goodwill near the pharmacy.  So glad I did as I found this book on the shelves.

It's the kind of book about hospitality and entertaining that I enjoy... full of great recipes and beautiful pictures.

I told you I was reverting back to my Kindergarten self, can't you tell?  I want pictures with my words.  ;)

It also has some seasonal craft ideas and while they display the food in Longaberger baskets and such... you don't need to own any to enjoy this gorgeous book.

Some of the sections within the Seasons include: Christmas, Mother's Day, Summer picnic, tailgating party, spring showers, etc.

Now to the books that don't have pictures.  :)

Anathema by Colleen Coble
My friend, Linda, gave me this book after she read it.  Since I was already reading another, I gave it to my husband who carried it with him and finished it in the waiting room during my eye surgery.

I started it earlier this week as soon as my eyes could focus well and stayed up until past midnight that same day (the next morning?) to finish it.  I'm passing it on to my daughter-in-law for her to then give to her mother as it takes place in an area they like to visit.

Anathema is not your usual Amish novel.  For one thing, it is a rather gritty murder mystery.  The author said she got the idea for the novel after the Amish schoolgirls were murdered in Pennsylvania... what would happen if forgiveness is not given?

It opens with the murder of an Amish young woman's parents and ends ten years later with her return to Amish country.  In between is one really good story about forgiving yourself as well as others.

The original version of Sir Gibby is free on the Kindle and Project Gutenberg and a modern children's version is available.  It's a great story about a boy who starts out in poverty even though his family was of noble decent and follows Christ to become a truly noble man.

Bel Lamington by D. E. Stevenson
I had been told for awhile that I must read this book since it links in with my favorite D. E. Stevenson books (beginning with Vittoria Cottage).  Although it is easily a "stand alone" story.

Bel begins in London but ends up in the Scottish Highlands where she interacts with the characters from Music in the Hills and Shoulder the Sky (the second and third books after Vittoria Cottage).

While not wanting to give away the story, this is the kind of book so rare today that can be enjoyed by teenage girls as well as older women, a book whose main character is one who is chaste but not at all boring.  Like all the D. E. Stevenson books I've read, it is a great story from beginning to end.

I had to get Bel Lamington from Inter Library Loan through my library.

NOTE:  I almost lost this complete post!  I should have known better because this has happened before but a note to myself and to anyone who posts in Blogger.

If you do a Spell Check, note what needs to be corrected and then get OUT of Spell Check before you correct anything.  Sometimes it gets goofy and wipes out a complete post when you try to make a correction while still in Spell Check mode.
Posted by Brenda@CoffeeTeaBooks at 11:00 AM

Can't wait to look for some of these...especially the D.E. Stevenson title!

I recently finished Agnes Grey by Anne Bronte (free for Kindle) and it was so sweet. I also am almost finished with the fiction series Chronicles of the King by Lynn Austin which I HIGHLY recommend. :)

I like your book reviews, especially the D.E. Stevenson title; can you believe I have not yet read any by this author! Due to blog mentions I finally read Barbara Pym and love her. The cooking magazines and book are intriguing.

I have finally started a book by D.E. Stevenson - The Marriage of Katherine. I am enjoying it - it was the only Stevenson book at my local library! I will have to look to inter library loan for the one that preceeds this book.

I am in need of some cooking inspiration - so maybe I'll have a look at the magazine!

So glad you like Bel Lamington...Now you should read Fletcher's End, the sequel to it. Do you have a copy?

I'm not sure if Australian non-metric recipe measurements are the same as American. I know the British are a little different. But the book sounds very interesting!

There is a good little chart down a bit from the beginning of the article. Though they use the same names, most of the Aus measurements are larger than the US...Oh, why don't they standardize these throughout the world?!

I found out about D.E. Stevenson by reading your blog. I have so enjoyed her books.

I too, enjoy looking at magazine and books that have recipes/pictures in them. I especially like Taste of Home and I have several that I should bring to Goodwill so others can enjoy them.

Hi Brenda...great list! I just finished reading an Alice Sligh Turnbull novel, have you ever read her? I found a stack of her books at a used book sale and thought I'd take a chance as the price was right. I'm currently reading another of her books titled "The Bishop's Mantle". So glad you're mending so nicely!
Love,
Tracey
x0x

Oh I should have read your post before tiptoeing through your Amazon portal today. I might have had to increase my order. Anyway, you'll know that we are still battling fleas and that I've taken you up on purchasing vanilla beans via Amazon. Oh the power you wield over me!

I must remember to look at Goodwill in the homemaking and recipe book section for such books. I almost always forget.

As an Australian, I know that all our recipes are metric. Therefore, this book would have been reprinted specifically for the American market and using standard US measurements.

Books and Tea (all the time) and Coffee (once in a while) - couldn't resist checking out your lovely blog! I'll be back in a day or two when I'll have time to dig in.

Hi Brenda, Have you read "The Treasure of the Celtic Triangle" and "From Across the Ancient Waters" by Michael Phillips? They are great books. I have another one of his books in my stack to read. I love books about the Amish so I will have to add that to my list.
Love,
Marie