At the edge of the storm...


I don't remember ever seeing a storm like this before.  While there was devastation on the east coast, we were (and still are) under high wind warnings with the winds between 30 and 50 mph.

There are gale force winds on Lake Michigan and people are being advised to stay away from the lake shore.   Chicago is over 1,000 miles away from where the hurricane (now a superstorm) came ashore.

My family in New England lost power for awhile but they are fine.  Stephanie said they had to eat their dinner by candlelight and Anna asked, "Are we going to sing Happy Day to me?", hehehe.  I remember when Christopher was so little and thought candlelight at the dinner table always meant a birthday! 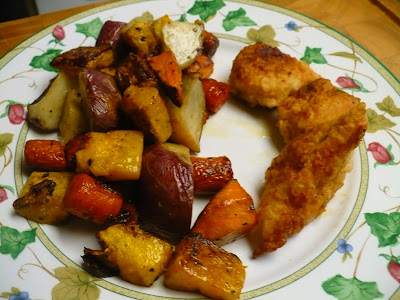 With the winds howling outside last night, I felt the need for comfort food!  I already had chicken defrosted to make homemade chicken nuggets but as I thought about side dishes, only roasted veggies sounded good.

So I cleaned and quartered three potatoes, one sweet potato, one butternut squash, and sliced three carrots... tossed them in some veggie oil... and roasted them in the oven until they were just right.

An absolutely delicious way to use those bits and pieces of root veggie leftovers.  They were so pretty, I had to take a picture!  My husband still shakes his head and is baffled when I take pictures of dinner.


But he understands picture of Her Queenly-ness.
Posted by Brenda@CoffeeTeaBooks at 9:49 AM

This was an amazing storm! We were prepared to lose power, our electric company put out the word that it was likely to happen and that we should be prepared for it to be out for days!

But this area is good - there is some storm damage, trees down, rivers rising, but most folks that I know have power!

I saw video yesterday of people surfing on Lake Michigan in Chicago...unbelievable!

Brenda:
The roasted vegetables look delicious. I love the picture of Victoria "supervising" your work! (in MD)

Oh that sunset is fine. Glad to know that the NE contingent is safely through the storm. We're having more leftovers today. In fact, I must shut down the computer as I hear the rumble of thunder in the distance.

Those roasted veggies look so yummy. Some day your hubby might enjoy seeing that photo. I think it's beautiful.

We enjoyed the wondrous sunset last night here in NE Indiana, too! Felt a little guilty being so snug and warm and able to sleep so well. The wind IS still blowing here though - and sleet was hitting our windows when I woke this morning. The clocks were blinking, too--so we must power must have flicked some....

Glad you and your family got through the storm all right.
North of Toronto we were lucky. Just got a lot of wind and rain.
Prayers for the people affected by the storm in New York and the east coast.

So glad besides the wind you are all fine there. Thank you for the idea on using the leftover veggies. I have such in the refrigerator and guess how they will be used tonight! ?? :) I forget about roasting veggies. Did you put any spices or herbs on them? Sarah

I like roasted veggies drizzled with some olive oil and sprinkled with rosemary and thyme.
Victoria is a lovely cat--and a good companion.

Tis comforting just to see your comfort food...so keep posting photos...men, so often clueless about some things...heh! Cute photos of kitty too...looks so nice and fluffy, must be fun to pet her.
Elizabeth, now of VA

Fresh from viewing hurricane Sandy on our Tv, had to check up on you. Blessings, Maureen in N.Z.

YUMMY!! Those veggies are pretty and sound SO yummy. Sunshine